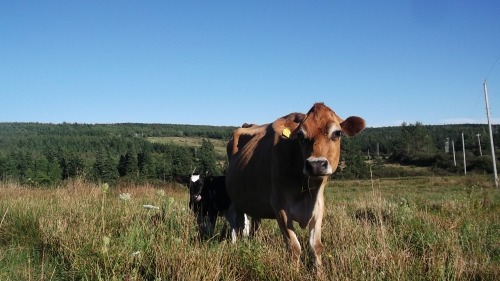 She’s not ours. I don’t see how anyone can truly own something with a soul, and you could take it further and say that nothing in this world is really ours, that we are just guardians until it passes on or we pass on. But either way, it’s not ours. We’re just test driving it.

Jericho is a Jersey cow, who’s milk I believe is comparable only to it’s island neighbour, the Guernsey. Oddly enough we have a friend from Guernsey who’s name is Nick de Jersey. I never tried his milk but his beer, wine and conversation made for fine times.

Anyways, we have tenure over Jericho for another week and a half, during which time she’s getting Bucky, our Jersey calf, and Patch, our Holstein calf, off to a good start. And when I get a nice stainless steel bucket I might try some of her milk for ourselves. Then, I suspect, we’ll ask her to stay a while longer.

This entry was posted in Moving To Canada. Bookmark the permalink.