Forgive me father, for I have blogged.

How long has it been since your last blog son ?

A long time father. Too long. I had not planned for such a long absence, but life, y’know…

Life my son, is what happens when you are making other plans.

Wha-? Father, that’s insightful… It’s like you  can see into my very soul.

Well son, this is an internal dialogue. After all you know full well that if you ever did step into a church you ‘d burst into flames.

Aw just get on with the story!

-sigh- Okay. Where to start? How about the present: 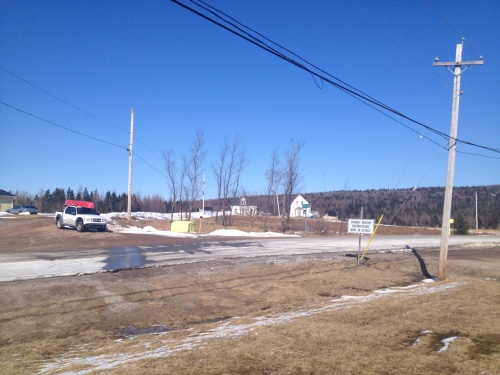 Spring 2014. Officially, although Sheila is arriving tomorrow with 40cm of snow and 100km+ winds to spread it about a bit. Still, that stubbly brown stuff hasn’t been seen around here since last November and in a month it’ll be green and perky.

We are however Townies at the moment. Winter came early you see, and has hung about a lot with only a week of respite in January that allowed people to take the pencils out of their nostrils and stock up on canned goods.

Every four winters is like that here, so they say. And this is our fourth. Long, hard, with lots of snow. And our water froze way back in November. I spent five or six weeks chasing it back to the wellhead, which if you recall is buried six feet underground. When we came here in 2010 the footer valve was stuck open. This winter it has been stuck closed so after spending christmas bouncing between friends houses we found somewhere in town that we could rent on a short-term basis. Problem is Laura has developed a taste for running water, heat, white walls and convenience and has burrowed right down into her townhouse, refusing to leave it until we’ve doubled our current 25’x25′ footprint on the farmstead, or at least put some storage in, a working kitchen and some wallboards.

Our business has also changed. We’ve spent much of the last fifteen months or so building and running a cafe & bakery on the waterfront in Port Hawkesbury. We built up a great following by making honest food from scratch using local ingredients wherever possible. Then for a variety of reasons we felt we had to move it from the waterfront to a busier location in the mall. We’ve been open for a month now and the response has been positive.

Our lack of running water and attending farmers meant that we put all of our remaining animals on the truck to Truro or in the freezer. This has meant that we can rethink the farm and are going to try vegetables this year instead. After all they don’t tend to trample my neighbours prize vegetable patch or run out on the highway and we have a market already in our own cafe so we’re hopeful this will work as another source of income, then we can just get a few pigs or lambs to raise seasonally for our own cupboards.

We’ve learned lots of things and have lots to tell you, so hopefully there won’t such a long hiatus this time.

This entry was posted in Uncategorized. Bookmark the permalink.

2 responses to “Forgive me father, for I have blogged.”